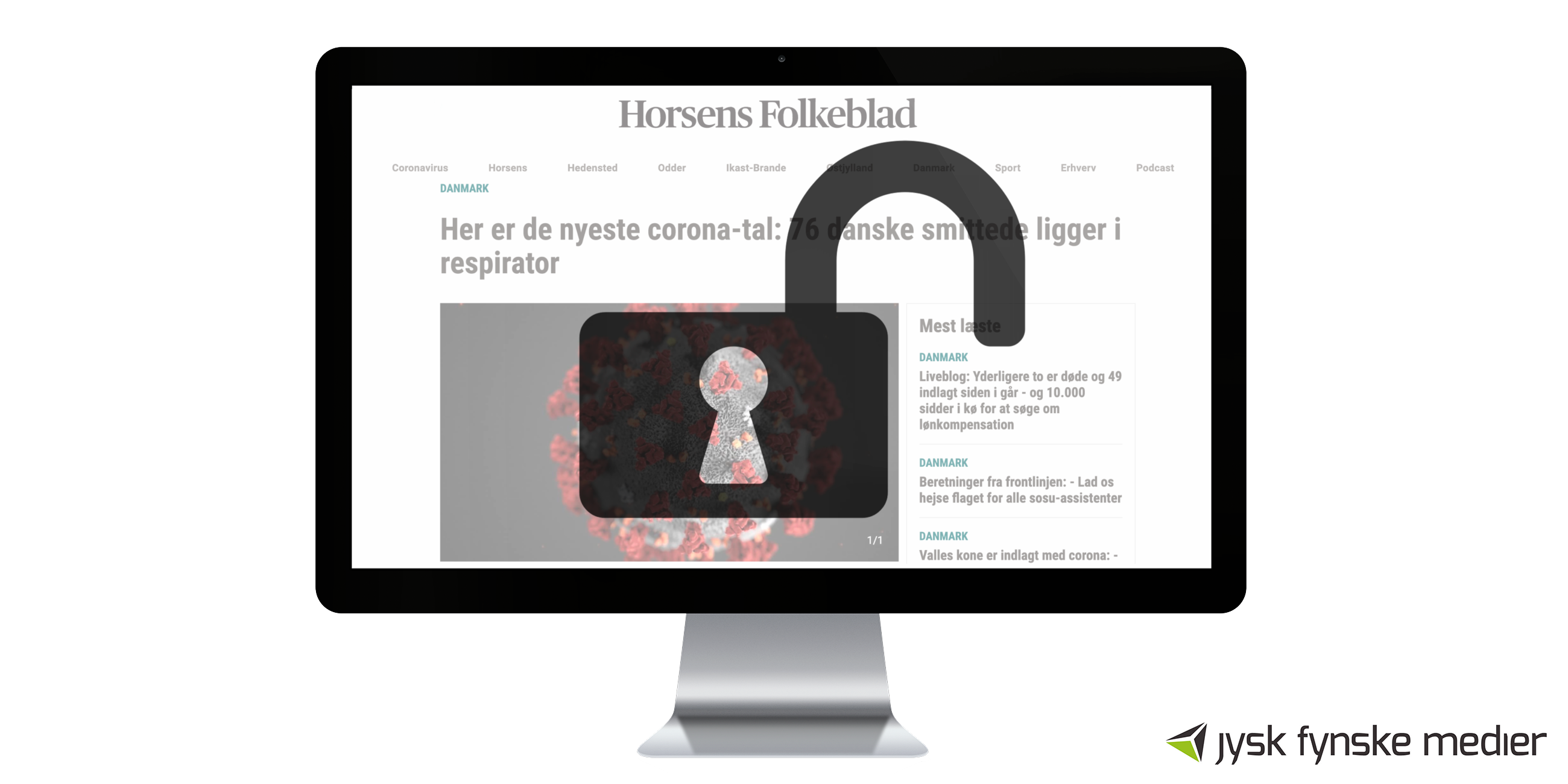 According to a new study from Trygfonden, the traditional news media are considered to be a more trustworthy and important news source than social media. But the encouraging news are overshadowed by the Covid-19 pandemic which is adding pressure to the media industry with the local media and small media houses being particularly threatened by the current crisis.

But despite the fact that Jysk Fynske Medier - Denmark's second largest media group with 70 local newspapers - is looking into a loss of more than DKK 100 million as a result of lost advertising revenue due to the corona crisis, they have decided to remove the paywall from all corona-related articles.

Claes Senger Holtzmann, Data & Analysis Editor at Jysk Fynske Medier, have shared the strategic considerations behind their decision and how it has proven to help them now in hindsight.

Eight reasons to why Jysk Fynske Medier actually benefits from removing the paywall on corona-related articles:

1) We live up to our publicistic purpose about supporting the local community. The need for trustworthy local information has never been bigger, and we make a difference by allowing everyone to read along. Even though a case article about a corona infected person might not contain factual emergency information, it still helps showing people just how serious the situation is. For some, facts and numbers isn’t enough.

2) We do what’s best for our subscribers. On the one hand, you can say that subscribers might feel cheated because others can get for free what you have paid for. On the other hand, you can say that our subscribers have a personal interest in that everyone receive important information about how they should act. It is of personal value to them that the neighbor, colleague, and everyone in the local community act responsibly.

3) We open people’s eyes to the value of what we do. Already before the mayor campaign (where 36 mayors from Jutland and Funen encouraged people to support the local media), we saw that a lot of users was buying a subscription through the banner campaign, we are currently running (where we tell that we have unlocked the corona articles but encourage the users to support our coverage through a subscription). The mayor campaign helped us a lot, but approximately half of the conversions came before the mayor-campaign was published. It is users that pay for our effort to make a difference for the local community – not just for getting access to content behind the paywall.

4) We learn a lot about the value of what we are doing – seen from the subscribers’ point of view. We often focus on the fact that we sell content and thus overseeing that it is of value to people to make a difference by supporting a meaningful purpose.  While we make many articles every day that are personally relevant and meaningful to many readers, we also make stories that are not crucial for the individual to read, but the person wants to support what we are doing. The critical questions after a somewhat boring city council meeting isn’t necessarily content that you just have to read – in the same way that you just have to watch Game of Thrones. Maybe we aren’t even making a story from the meeting if there isn’t anything to tell.  But the local citizen want to support that we stay alert and work for the local community. It is a service they help finance – not just content they buy access to. And it is of value to them being part of it.

5) We are better aligned with the value of helping to make a difference for the local community. At present, we have full focus on being critical, constructive and edifying - rather than looking for flaws and cultivating polemical debates about hypothetical problems. It is not a given that our local mayors would have shown the same support if our purpose wasn’t so obvious and our articles were free (our local media has, among other things, created campaigns encouraging citizens to support local businesses). And it also follows that asking for support is not a sign of weakness. It's an invitation to help make a difference. It is also of value to the individual, and it commits us to an important direction.

6) We do not open a flank, eg. for BT, Ekstra Bladet and others. In Sweden, many local media have maintained the paywall, and this has caused Aftonbladet to expand coverage locally. At home, we also see BT and Ekstra Bladet focus on the best local stories from around the country, and it is toxic if we make users, who could potentially become subscribers, accustomed to use other media.

7) We get a lot of loyal users: The segment we are easiest able to convert to subscribers and retain as subscribers are users who come to our news sites almost every day. And it is the segment of users who come to our sites four, five or six times in a week that has grown most during the highly intense corona week, our data shows. The three groups all have an increase of over 50 percent. In other words, we are building a habit among a segment of users, and we can take advantage of that. Both in terms of reaching out more broadly in the publicistic context, but also in terms of converting and retaining users as the degree of gating increases again.

8) We get a lot of young users: For decades, we've been talking about the print newspaper's aging audience and how to 'get hold of the young people'. According to Google Analytics demographics data, the 25-34 age group has grown the most during the Corona period - by almost 50 percent. It is in this age group that we have the most users on our news sites.

It would quite surely have served Jysk Fynske Medier better to keep some of the corona articles behind the paywall on the short run. But the operation has given them something to work on moving forward, Claes Senger Holtzmann states.

We ensure the digital distribution of your publications
This blog post should not be considered as advice to remove the paywall - neither partly or fully. We do not have any opinion about what you should and should not do in this difficult times. We can only encourage you to keep up the good work, and we will make sure that the digital distribution continues to run smoothly.

We have prepared ourselves for the current situation by making new investments to our data center which means that we can handle an extensive increase in digital distribution - for instance if a media houses choose to temporarily stop the print distribution in the corona times, thus leading more users to the digital edition.

If you have any questions related to aforementioned matter then feel free to contact us by phone +45 7023 3544 or email support@visiolink.com