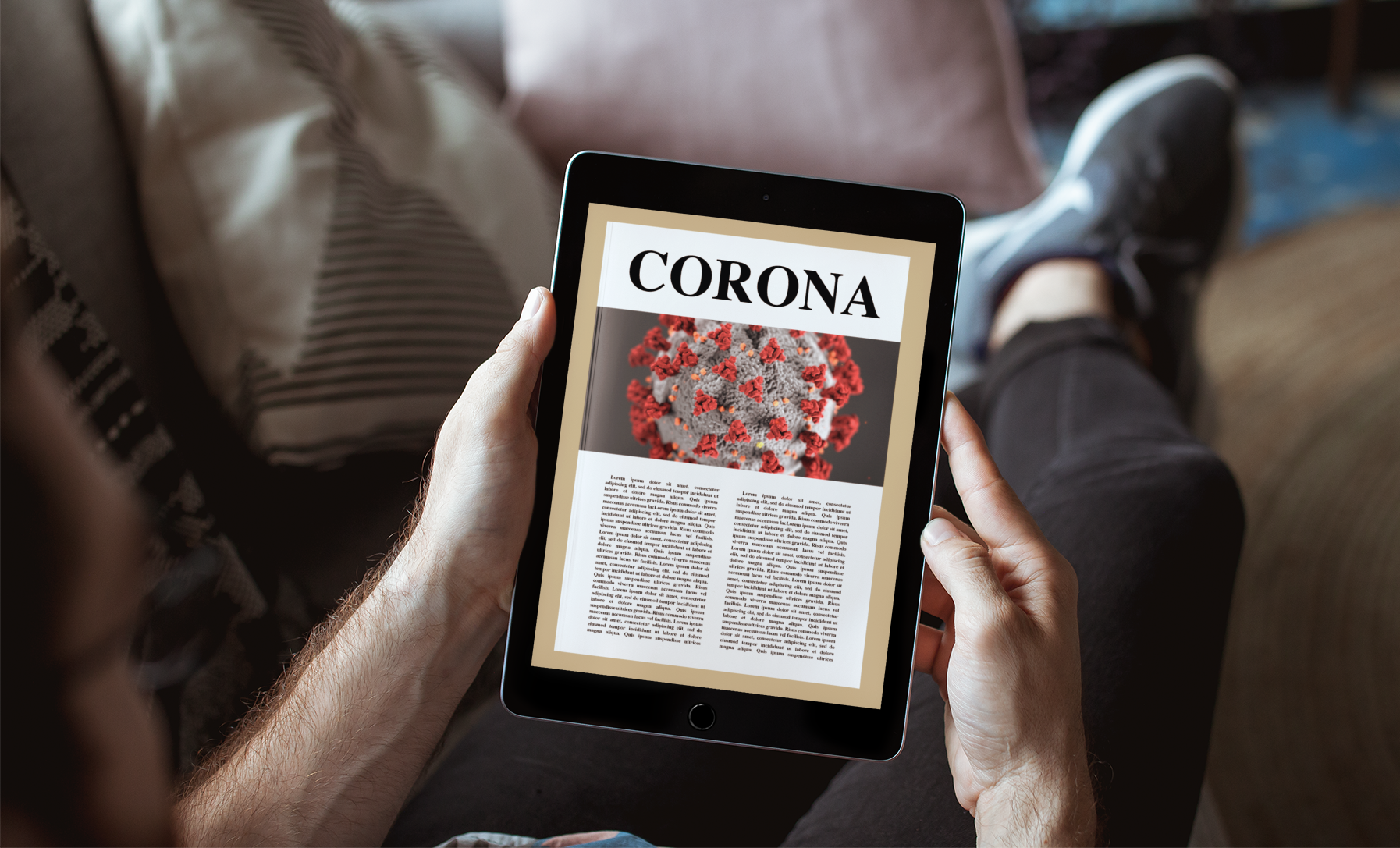 The media's corona coverage has peaked - does it reflect a turning point in the pandemic?

The public is very much influenced by the media in regard to what we talk about and what is top of mind. In the same way the media also reflect if a specific topic has reached its peak. And it might look as if the corona pandemic is starting to slow down – at least in the sense of media coverage.

The corona virus (covid-19) is suspected to have emerged from Wuhan, China in late 2019. Soon after, the virus also started spreading in Europe with the first official reports about infected people coming from France on 24 January 2020. But it wasn't until many of the European countries started to shut down in early March that the media coverage really escalated. 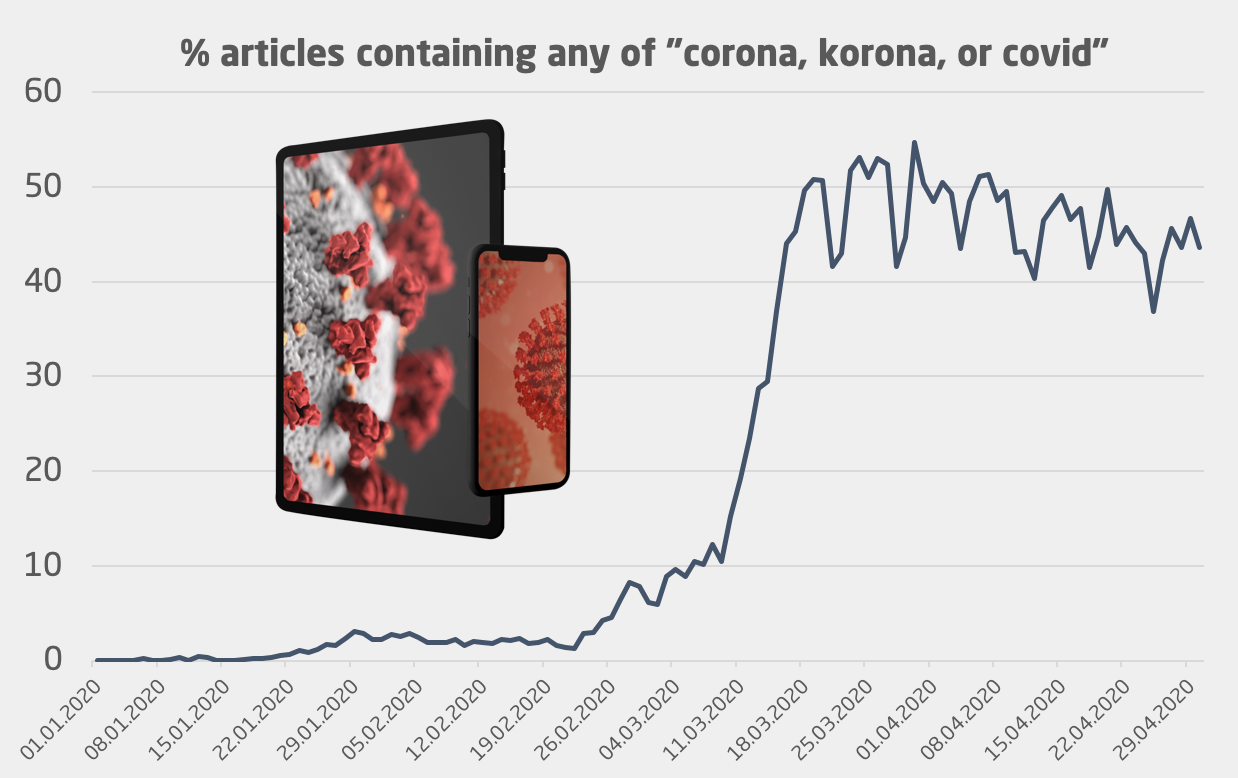 We ran a script in our database to test across all newspapers with XML (1,134 to be exact) how often corona/korona or covid was mentioned in articles and how the coverage has developed through time in the European newspapers.

So, how did the 1,208,587 articles containing any of the corona related words distribute during the first four months of 2020?

Well, it is "funny" to see how there is little to no coverage in the beginning of the year while it still wasn't a local problem, so to speak. But once it reached Europe (officially), we see a heavy increase with the virus being mentioned in approximately every second article since mid-March – topping on March 30 with 54.7 percent.

By the end of April, this number had dropped to 44.6 percent, and we see a steadily decreasing prevalence since the peak of the media's corona coverage.

This could indicate that the focus is returning to other of the world's hot spots, political debates, climate crisis etc. Make no mistake, many countries are still very much affected by the pandemic, but if we take an objective, and yet completely unscientific, look at the media coverage, then it might seem as though other topics are starting to take up more space on the media's agenda.

You might go as far as to call it a normalization when "common problems" are once again reclaiming its space in the newspapers and thus, also in the people's minds. 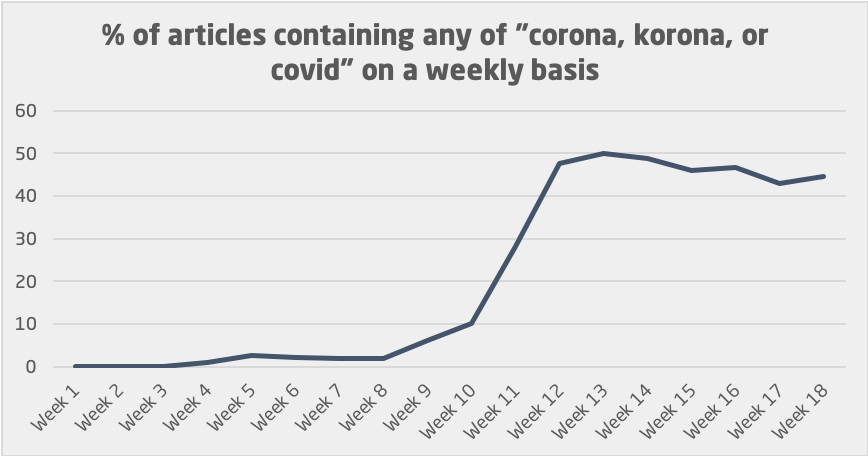 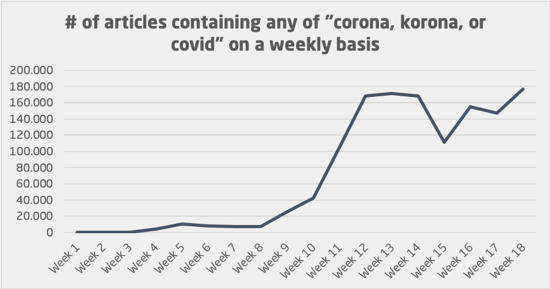 Note: The drop in Week 15 can be explained by the fact that not all newspapers publish during the Easter holiday.