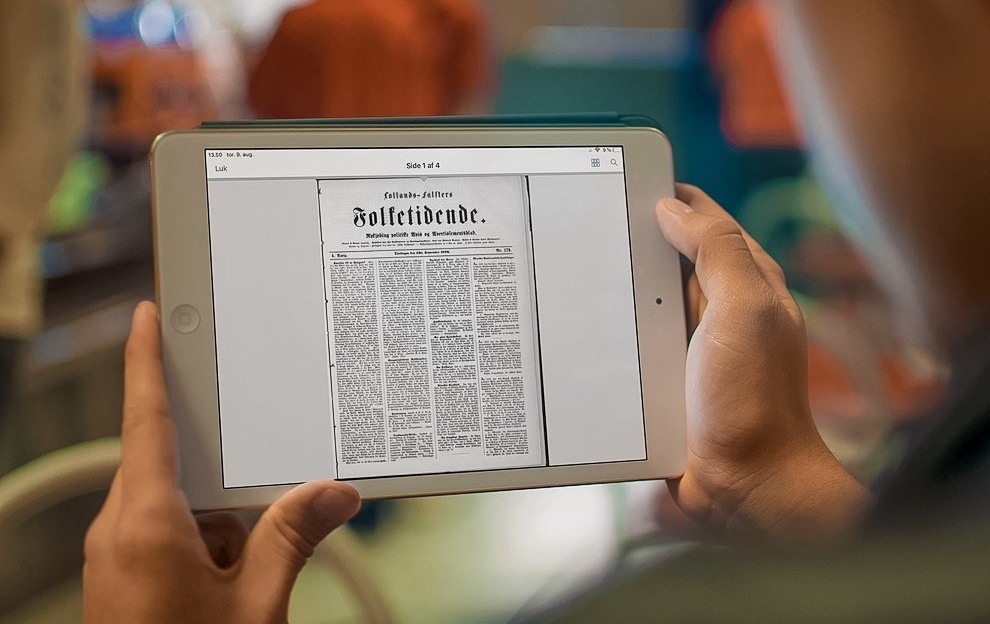 More newspapers choose to have their entire backlist of previous editions digitalized and distributed through their ePaper solution. A digital archive is indeed a large investment, but according to Danish news group Folketidende Gruppen it’s worth every penny.

As a step in a major overhaul back in late 2016, Folketidende Gruppen launched a digital archive with all previous editions of their primary newspaper “Folketidende” - dating back to the newspaper’s foundation in 1873. At the same time, they dropped the print-only subscription and converted this into an “all inclusive”-subscription with access to the ePaper and thereby the archive.

"The digital archive was and is an important tool in our digital strategy. The implementation was the first step of our digital transformation as it was a good opportunity to emphasize the value of our ePaper,” says Michael M. Benzon, Online and Digital Manager at Folketidende Gruppen.

A great investment
Folketidende is a rather small newspaper on a European scale with 11.000 subscribers and an estimated 33.000 readers according to the latest Kantar Gallup figures. So, one would think that digitalizing nearly 150 years of work would be too big an investment. But Michael M. Benzon assures that it's far from the case.

“We saw it as an investment in our readers and we were hoping that it would result in increased revenues in the long run. Our readers are in the high end of the age scale, so a searchable archive dating back to 1873 was very appealing to them,” he explains.

“Half a year after the launch, we increased the subscription prices with the biggest amount to date - at a time where we wouldn’t normally be making price adjustments. Despite of this, we experienced the fewest number of terminations ever. So, the big effort and investment around the launch really paid off."

Folketidende experienced a tremendous impact following the launch of their digital archive. But they've also put many resources into it to create awareness about the product.

“We promoted the archive, informed the print subscribers about the ePaper and used all of our own channels to tell about the archive. We made features with local celebrities, e.g. with an athlete who made a big result in the ‘70s and linked it to the paper from that specific day. We invited our subscribers to workshops at our three editorial offices where we would tell about the archive and how to use it while they enjoyed a cup of coffee, a beer or a soda. So, we invested quite a lot in our readers, and I believe that our consistent focus on the ePaper was the primary cause to why the readers chose not to quit," tells Michael M. Benzon.

“We experienced a doubling of pretty much everything. More people downloaded our app, we onboarded more readers and our page views went up. We received an overwhelmingly positive feedback on our workshops, and we can see that the archive is being used extensively."

Just go for it!
Michael M. Benzon is not hesitant to recommend a digital archive to other media groups who're looking for a way to revitalize their old content.

"My best advice to everyone who’re considering getting a digital archive is just go for it!” he says.

“The archive launch has really emphasized the value of our ePaper. We’ve obtained more subscribers, and our phoners now have more good arguments when trying to sell our product. But the archive also has great value internally because our writers use it to find old articles etc. So, there’s an economical saving as well because we no longer need to have archives two places - it's all gathered in our ePaper."

Want a digital archive?
If you want to learn more about digital archives, how your old print papers are digitalized and how it's implemented in your ePaper, then get in touch with your Visiolink contact. They'll be happy to answer your questions. Also, make sure you get a copy of our Archive Report. It can we downloaded by clicking below.

In 2013, Teknologiens Mediehus started the project ‘Digitization of the engineers’ cultural heritage’ which would eventually make their entire backlog of journals available for everyone to dive into.

Old news and newspapers are true gold mines in terms of knowledge. Svenska Dagbladet recently launched their archive, which dates back to December 18th, 1884. The archive contains more than 1.5 million newspaper pages,...