Being on top of the digital newspaper innovation game is key at Visiolink. We are continuously in dialogue with our customers to uncover their everchanging needs. Moreover, we do our best to translate these into new, tangible, and user-friendly features. You see, it is not enough to be able to predict the next big thing within digital news publishing. Wrapping new features in a way, which facilitates the smoothest and most user-friendly experience possible is key to the success of any digital newspaper app.

We all learn something new every day. When you have been in the epaper business for as long as Visiolink, it therefore goes without saying that occasionally, you need to revisit original features and make some necessary adjustments. The user-interface of our original Android design is an example of this.  One of the primary drivers behind the design, was to make sure its navigation structure showed clear resemblance to that of the Android operating system. But why force your users to learn a certain way of navigation, when you can create a user-interface, which complements user-expectations?

As the Interaction Design Foundation points out, you cannot put a single definition to what constitutes a good user-experience – it is context dependent. But characteristics of any good user-experience is that it meets the user’s needs in the moment of usage. When designing user-interfaces of epaper apps, it therefore makes sense to take a step back and try to put answers to the questions: Why do users consume news apps? What are the primary drivers behind their interaction with an epaper app?

Altogether, the matter of fact is that epaper users primarily consume news apps to get updated on the latest stories. Apart from that, they expect it to be served in the most convenient, seamless, and intuitive way possible. This is not least true to young consumers (the under 35s). This segment uses news apps to efficiently access news in-between other activities. They expect news apps to structure content according to a timeline or by means of a seamless and intuitive navigation design. Meanwhile, news apps that mimic physical newspapers are considered too difficult to navigate.

One of the most distinctive characteristics of the News Modules design is that it structures content in, yes, full-width modules. Compared to the original Android design, users are now presented with a clear overview of where to find specific types of content - e.g. editor’s pick, videos, live news, podcasts, etc.. This design was developed according to some of the most fundamental laws of human perception theory – the Gestalt Principles. Following the Interaction Design Foundation's definition, the Gestalt Principles describe how we, as humans, unconsciously group similar elements, recognize patterns, and simplify complex images when we perceive objects. Our News Modules design especially rests on the principles of common region and proximity. These explain how we intuitively decode content elements grouped together as sharing essential characteristics, which sets them apart from more distant groups of content. Our original Android design did not allow users to make these unconscious interpretations, as not all content types were grouped. Instead, users would come across a given type of content e.g., narrated articles, multiple times while scrolling down the start page.

The design of content modules enforces a better user overview

The News Modules design not only allows users to efficiently uncover where to look for specific types of content. It also gives users indirect pointers as to whether more content is available and how to locate it.

To exemplify this, have a look at the illustration below. 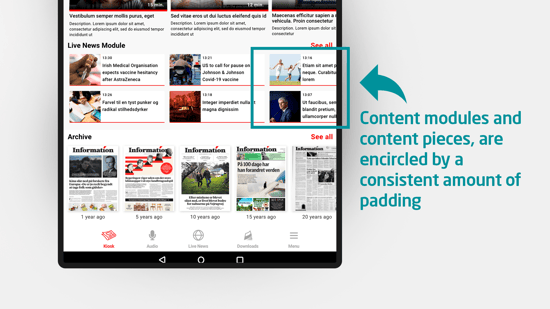 Notice how each module is encircled by a consistent amount of padding? Having these margins not only enforces a sleek design, it also gives users an intuitive hint that more content is available whenever the padding is absent in-between content pieces of a content module. Following the principle of closure, the human mind prefers complete shapes. In turn, whenever we are presented with incomplete shapes, we construct a whole from what is available to us. The News Modules design indirectly teaches users that an element of padding is consistently applied in-between pieces of content. Following the principle of closure, the user therefore intuitively reaches the conclusion that more content is available, whenever a piece of content isn’t fully visible and encircled by a space margin. Add to this, how live news, podcasts, supplements, and video modules arrange content pieces according to a chronological timeline , and you have an interface, which to a higher degree makes it possible for the user to quickly decode whether they have read, listened to, or viewed the latest stories available. Arranging content pieces in modules, further allows to display more epaper features, such as e.g., a news archive visibly on your start page, which previously was not possible.

Have a look at the illustration of the original Android design below.

You may notice that our original Android design is likewise characterized by a consistent amount of padding between content pieces. In turn, content pieces at the bottom of the user-interface equally enforces the principle of closure. However, where the former Android design falls short,  is in how it does not arrange content in structured modules, which means that the user is not offered a quick overview of available content types. On the contrary, they may be inclined to experience some level of frustration, as the start page seems to offer unlimited content in a vertical scrolling trail.

The News Modules design also introduces bottom menus to the Android interface, which is intended to make the hierarchical navigation between app sections much easier for the user.

To exemplify, have a look at the illustrations above. Basically, we have primarily introduced the bottom menu  in order to give the user faster access to content, which was previously only accessible via the menu icon - with a bottom menu, publishers have the opportunity to give extra attention to their most important content. The bottom menu is also a good idea due to plain human anatomy - it is simply easier to reach the bottom of the screen with your thumb when navigating an epaper app on tablets or mobile devices, than it is to reach the top of the screen. Furthermore, introducing bottom menus trickers instant recognition amongst a big group of users, as social networking apps have been operating with these for quite some time already. Finally, as we all know, a picture is worth a thousand words. As humans, we decode an image much faster than text, which is why we have chosen to introduce icons as a larger part of the menu navigation design.

Want to learn even more about the possibilities of the News Modules design and what it looks like on Android? Have a look here or feel free to reach out to your Key Account Manager. 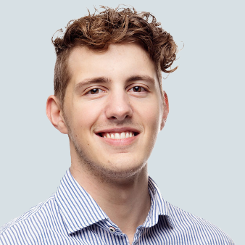