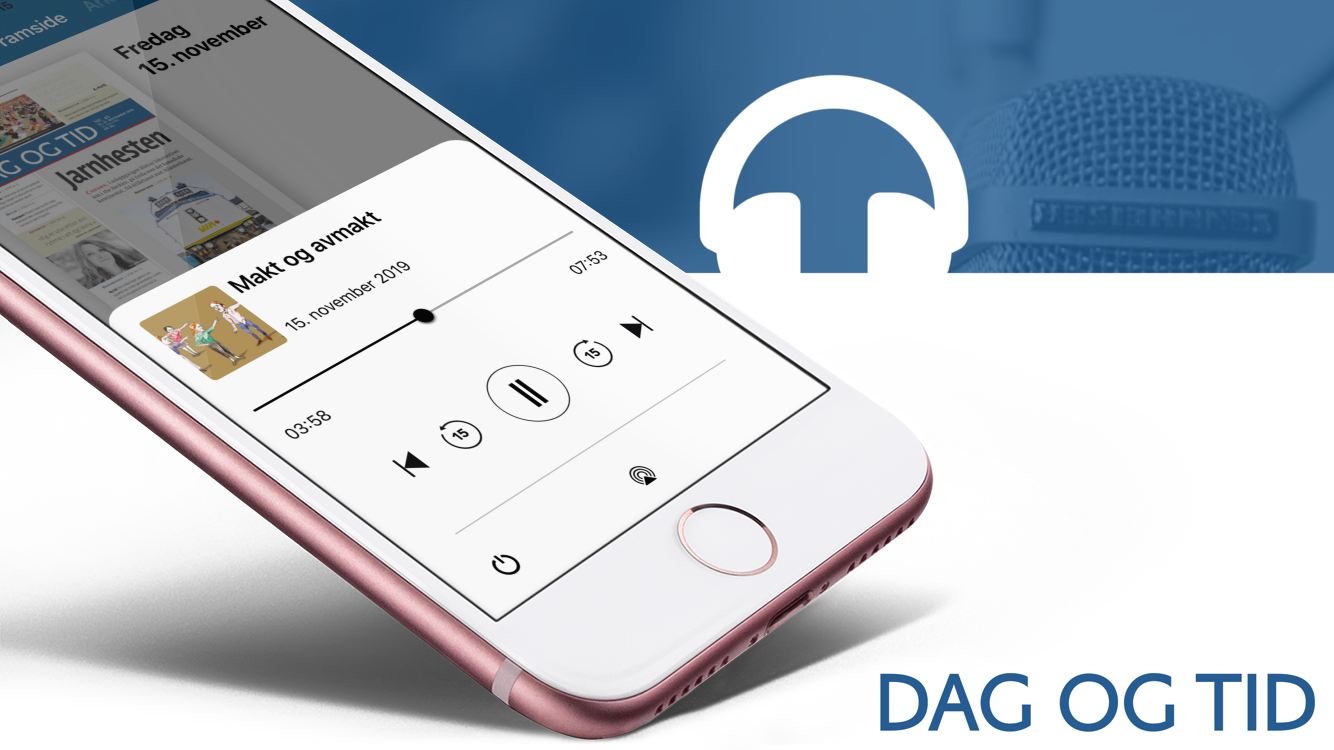 Norwegian newspaper Dag og Tid launched an audio newspaper with the goal of holding on to their churning subscribers, but it proved to be a great initiative in many more ways. In this case study, we catch up with Gregor Falkner to learn more about the effect so far.

Dag og Tid launched their audio newspaper on May 24, 2019, and each Friday they publish five narrated articles along with the weekly newspaper. Though it's still early to evaluate on the effect, it seems that the narrated articles have boosted the users' engagement time.

In fact, the users who have been using the new offer spend nine percent more time in the Dag og Tid ePaper app than the average user did before the audio newspaper was launched on May 24. And the people at Dag og Tid believe that this will increase even more with time:

“The job has been, and will remain to be, to establish a routine among our subscribers of listening to narrated articles. We were the first newspaper in Norway to initiate something like this on a regular basis, so, it’s not something the people are used to. It takes time to build up this habit” says Gregor Falkner, Marketing Manager at Dag og Tid.

Dag og Tid is a small, independent newspaper that focus mainly on culture and politics. It was founded in 1962 and has experienced increasing popularity especially throughout the last two decades. And their latest initiative with the audio newspaper further boosted this tendency according to Gregor Falkner:

”We have eight percent more paying subscribers compared to the same time last year, and I would definitely say that the audio newspaper is one of the reasons to this.”

“We have exceeded a circulation of 12,000 in the second half of 2019 for the first time, and a few weeks ago we exceeded 11,000 paying subscribers also for the first time. So, even though I don’t have the exact figures, I would say that the return on our investment is starting to show and will continue to do so in many years in the future,” he says.

A great selling point
Even though, the Oslo-based newspaper is experiencing more attention and a bigger demand, this wasn’t actually their primary reason for introducing an audio newspaper.

“We saw it as an anti-churn initiative first and foremost, and we do see that leaving subscribers have stayed after we introduced the audio newspaper. But there’s definitely also a commercial aspect to it, which we are very happy about,” Gregor Falkner states.

There has been a lot of focus on audio throughout the last couple of years, and Dag og Tid chose to ride the audio wave after a serious and thorough research phase. They build a new sound studio and hired a person with radio experience that drops by every Thursday to record the articles that are not narrated by the writer him/herself.

So, there has been a considerable implementation costs alongside the necessary change up in the editorial workflow. All the more reason for putting in an extra effort to ensure that the Dag og Tid audio newspaper would be well-received by the subscribers. And so it did.

”We posted ads in our newspaper promoting the new audio universe and explaining how to get started. We still have a lot of print only subscribers as the additional digital access is only included in a more expensive subscription. So, during the Summer we gave everyone access to the audio newspaper, and we also allocated resources in our telemarketing team to encourage our subscribers to try the audio newspaper. The point was to give them a teaser and hopefully convince them to upgrade their subscription," says Gregor Falkner.

Dag og Tid announced on their Facebook page that the new audio newspaper was available on May 24, 2019.

”Our telemarketing team tells me that the audio newspaper is a great selling point. It’s an advantage when we try to attract new subscribers because we offer something unique. But more importantly, there’s the retention perspective where we try to hold on to our churning subscribers. Many terminate their subscriptions because they don't have the time to read the newspaper, and now we can suggest the audio newspaper as an alternative. And the response I get from the telemarketing team is that it is an argument that works,” he states.

At the Visiolink Inspirational Tour 2019, Gregor Falkner presented the Dag og Tid audio case. In the video below, you can learn his five tips on how to successfully implement audio in your content mix.

Want your own audio newspaper?
If you're also interested in exploring the possibilities of incorporating audio in your ePaper, then make sure to check out our audio feature range Audio Anywhere.