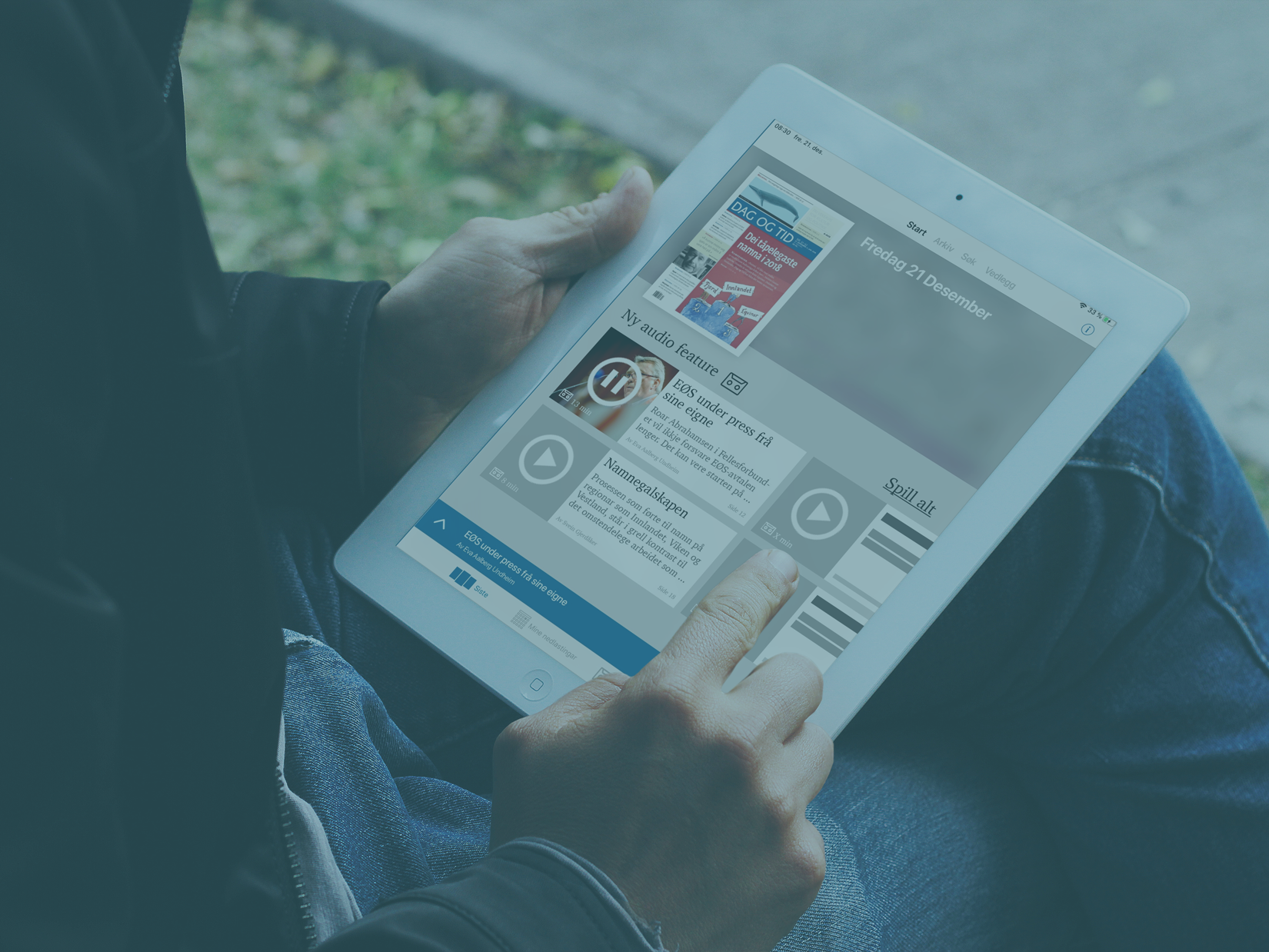 DAG OG TID hold on to their subscribers with narrated articles

Norwegian newspaper DAG OG TID has introduced audio content in the form of narrated articles in their ePaper with the ambition to reduce churn and attract new user segments. Marketing Manager, Gregor Falkner, takes us behind the entire process from initial idea to launch.

Although DAG OG TID have been enjoying great success throughout the 2010s with increasing readership figures, they’ve never stopped reinventing themselves. In fact, they've turned to the people least likely to recommend them in order to identify areas of improvement:

“We have a routine of sending out questionnaires to leaving subscribers asking them to explain why they’ve chosen to terminate their subscription. Most of them actually like the newspaper, but they feel bad about the increasing amount of newspapers they don’t get to read, because they don't have the time,” explains Gregor Falkner, Marketing Manager at DAG OG TID.

“This gave us the idea to offer the newspaper in an alternative way. So, we mentioned the idea of an audio newspaper in the questionnaire and asked the subscribers if that could help them find more time for the newspaper, and approximately 60 percent said that they really liked that idea.”

Goodwill pays off
The Oslo-based newspaper focus on culture and politics, and Gregor Falkner says that this is part of the reason to why they turned their attention to audio.

“We are a weekly newspaper that focus on longer, in-depth journalistic pieces, so, we had a strong belief that our content would work well with voice narration because it differs from the quick news that are already covered by the radio media,” he says.

DAG OG TID's initiative shouldn't be considered as an excuse for raising the subscription prices, and Gregor Falkner insists that they haven't been doing any cost-benefit analyses. But he's sure that it will still prove to be a reasonable investment in the long run.

“First of all, we see it as an extra service to our existing subscribers whom we want to give a better digital experience. We want them to feel that they are presented with the content in a more personal and relevant way and use the newspaper more frequently. But it’s also our goal to increase the subscriber base and raise awareness about DAG OG TID. It’s the first time anyone in Norway does this, so, I believe that the news value alone will create a lot of attention."

Include audio content in your solution with "Audio Anywhere"

Audio content – best emphasized by podcasts – is a media format that appeal to younger segments. Something which the newspapers struggle to do. And this was also an important factor for DAG OG TID.

“The initial idea originated from the churn perspective, but obviously we also think about the younger segments who listen to podcasts and narrated news as being an interesting target group in this case. We’ve done quite a lot of research before starting this project, and audio content is something that many people are familiar with and interested in. Especially younger people,” Gregor Falkner explains.

An in-house job
Gregor Falkner and his colleagues did some very comprehensive research before taking the leap, and he points out that it’s a big strategical decision to implement audio content as it also affects the daily routines of the editorial team.

“We’ve been talking to different newspapers who already work with audio content before we initiated our own project. For instance, I visited Zetland and learned how they do things, and which experiences they’ve had," he says.

"We want the respective journalist to narrate their own pieces if possible. I believe this will create a more personal relation between the user and the journalist. So, we’ve been giving our journalists professional speak and narration training. But we also collaborate with some professional narrators that can step in, e.g. if our own journalists don’t have the time,“ tells Gregor Falkner.

The new DAG OG TID solution with audio content went live on May 24, 2019. Initially, with narrated articles, but the Norwegian newspaper also expect to incorporate additional audio formats in their solution in the future.

If you want to experience the DAG OG TID solution first hand then find it on App Store and Google Play Store.